The pursuit of a doll can lead to quite a journey sometimes, in search of the doll itself, and of knowledge about the doll. A journey of this sort can take decades, and can encompass talismans that aid in finding that which is sought. This is the story of one seeker’s journey.

In 1984 I had the unique opportunity to move from Indiana to Okinawa as my husband graduated and accepted a teaching position with University of Maryland Asian Division. Another life-changing event occurred in the Spring of 1985 when, after three years of impaired fertility, I birthed my first son. Just five weeks later, in late June, the three of us embarked on a cultural tour of Japan with a U of M study tour. At this point, I didn’t think that life could get much better! 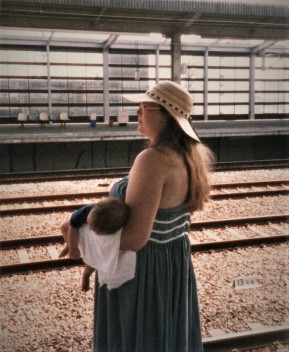 The tour did include a visit to a doll factory, the Hakata ningyo factory in Fukuoka. While I found this visit interesting, I was not too excited about these dolls which, though beautiful, are stationary and all in one piece, more like figurines.

Hakata ningyo ready to be placed into the salesroom

While it was relatively seamless for me to tote my young baby around and enjoy the tour (breastfeeding, of course!), it was necessary for me to spend a little extra time with him in our room each evening. On one of these evenings (as I found out the next morning), some of the other tour group members visited a nearby antique shop. One young woman had found an antique boy doll at the shop and was toting it around in her arms, as I toted my baby. I must say, I had more than a little envy that I did not have the opportunity to have found that doll! Yet, I consoled myself with my real little boy for whom I had waited so long. 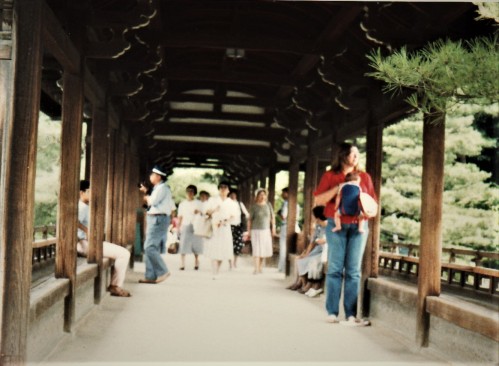 After this tour, back on Okinawa, I was able to take a kimekome doll making class. These dolls, similar to the Hakata dolls, are stationary dolls to be admired rather than to be play dolls. I worked on several dolls in the evenings, in the seemingly few minutes that my son slept. This way, along with in-class time, I was able to complete several dolls for myself and for gifts. I also bought several more of the kits, which I still have, still in kit form.

A kimekome ningyo that I made as a gift for my mother-in-law. After her death, it came back to me, and now belongs to my daughter.

I am proud to have made this detailed kimekome geisha with the help of my sensei.

I never forgot the little antique boy ningyo that I saw in the arms of another, and continued to watch for one of my own. In 1987 we moved to the Tokyo area, and I had another son. Even though there was a doll district in Tokyo, I never made it there. Overall, dolls were not a big priority in my life at that time, and my presumption was that the dolls I would find there would be new rather than antique, and more of the stationary type I had already seen, like those above, or like the wooden kokeshi which are also commonly given as gifts.

Kokeshi ningyo are regional dolls from Tohoku in northern Japan. Those shown here are of the made-for-tourists variety. These dolls have the kappa hairstyle (defined below). Author’s collection 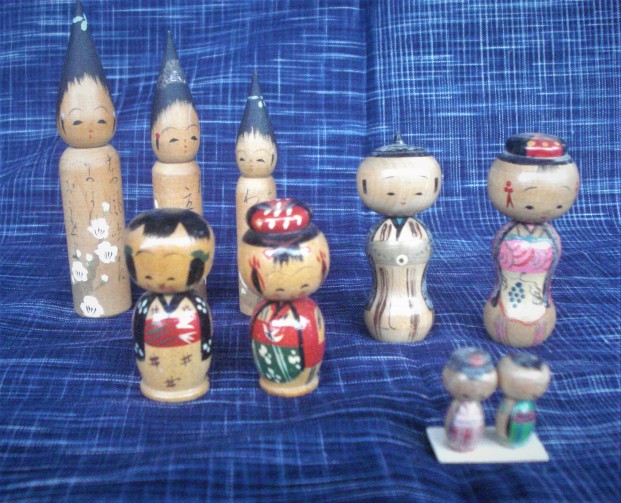 Here is a selection of small kokeshi that were made for the Japanese market. I found them at the weekly Salvation Army sale. They all have wobble heads. The tallest pointed hair kokeshi is 4″ while the tiny pair is a mere 3/4″. Notice the fabric-wrapped bun hairstyle on the mid-sized girls, and the shaved hair with hair tufts by the ears on the boys. This is Meiji era, or late 19th, early 20th c. and is earlier than the ichimatsu dolls shown below.

I did find some interesting second-hand shopping while I lived in Tokyo, including a weekly Salvation Army sale. One time I watched a worker unpack a whimsical small scale kimekome set of Dolls Day Hina Matsuri dolls in muted colors. As soon as she unpacked it, I bought it and she had to immediately pack it up again! (This set is still in Connecticut, so I cannot show you photos at this time.)

Hina Matsuri, or Dolls Day festival on March 3rd, displays a replica of the court, and is perhaps the most well- known of Japanese dolls.

My life in Tokyo continued to include travel, in which I delighted. In 1989 I visited Nagoya and went to the famous Nagoya Temple Market. At one of the stalls there, I found a girl doll with moveable limbs and real hair. I didn’t know what kind of doll she was (a Bunraku puppet doll, I speculated, but there were no strings). I bought her.

Shopping at the Nagoya Temple Market in 1989. I am on the left with my first son.

The doll was not in the best condition, and I set out to restore her, even though I had no idea how. She smelled of moth balls and the crinkled satin-like fabric that connected her hard parts was deteriorating. Her right arm was hanging by a thread, showing the cotton batting stuffing inside. She was also missing her obi (the belt around the waist of the kimomo). I decided to hand wash her kimono in cold water, and realized that was a mistake! The fabrics began to bleed! I removed them from the water and spread them to dry, but the beautiful floral design on the dark blue kimono was permanenty damaged by my ignorance about how to restore the doll. I did patch the fabric on her arms, then admitted temporary defeat and packed her away in a wicker basket. Luckily, I had the foresight to buy a pink girl’s soft obi to replace the deteriorated one my doll had, and a vintage narrow obi as a substitute for the missing one.

This is the doll as she came out of her basket when I brought her home to Oregon from Connecticut in 2014.

This ningyo hibernated in her basket on her trip moving to the United States, in Washington for ten years, then in Connecticut where she was initially left behind, and finally came home to Oregon in 2014.

Now a lot has happened, any way you look at it, since I brought this ningyo out of Japan in 1991. At that time, I could not identify the type of doll she is, I did not know about her materials or construction, and I did not even know how to dress her or tie an obi. Over twenty-five years of internet innovation and doll research have made it possible for this sweet Ichimatsu ningyo to come out of hibernation and “breathe” again!

The doll parts in partially restored condition as I had left her since 1989. The wooden box on the lower right is her squeaker that is now in her tummy. It still works by compressing the front and back together.

The first “talisman” that I found with exciting clues about the nature of my doll was Antique Doll Collector magazine, October 2015, which offered an article on “Japanese Ningyo.” Finally, I was able to identify my doll as an ichimatsu ningyo with gofun (crushed oyster shell) covered parts. Thank goodness I didn’t try to clean her face, or it would have disolved! Other magazine articles, most notably by Japanese doll and antiques expert Alan Scott Pate, followed. Books on Japanese dolls, written for English speakers, which didn’t exist 25 years ago, and internet sources on kimono and tying an obi, are my next talismans, and have given me the confidence to finish restoring my ningyo.

The water damaged kimono and other parts of the doll’s original clothing, including the little pink soft obi that is faded and shredded.

The vintage orange adult narrow obi is at the top. Below is the padded cord that goes on top of the obi, then the doll’s faded soft obi. At the bottom is the new girl’s size soft obi that I bought while still in Japan.

The red fabric is an underskirt that goes on the doll before the kimono. The bottom shows the signature (of the doll’s artist) papers that are wrapped around the doll’s torso before she is dressed. I cannot read the kanji, so I don’t know her artist. 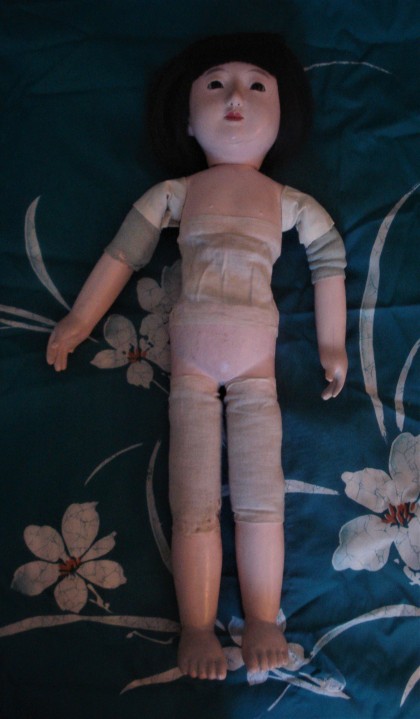 Here is my restored ningyo with new muslin fabric parts. The original pale green crinkled satin-type fabric is still on her arms. 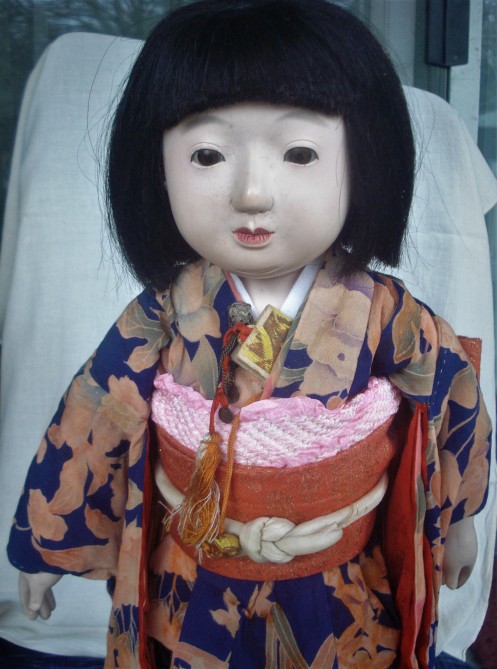 My ningyo, restored and dressed. She is 20″ tall.

My ichimatsu ningyo is of the Showa era, or circa probably 1930’s. Her hairstyle is called kappa, meaning “cap” and is similar to western bobbed or pageboy hairstyles of the 1920’s and 30’s. Although she does not measure up to Alan Scott Pate’s “good” condition, I love her dearly because I found her, and I brought her back to life after all these years.

The boy ningyo. He is 14″ tall. Though Showa era, he may be later than the two girl dolls.

Although eBay has been around for many years, to my knowledge, it is much more recent that dealers in Japan have been offering items for sale internationally on eBay. There is a wide selection of ichimatsu and other ningyo now available to choose from. And choose, I did! I found a small boy doll who is at least similar to the one I saw in 1985–it has been so long, I can’t remember that doll’s details very clearly. And I brought one more girl, perhaps in the “better” category, and two babies into my family of ichimatsu ningyo. 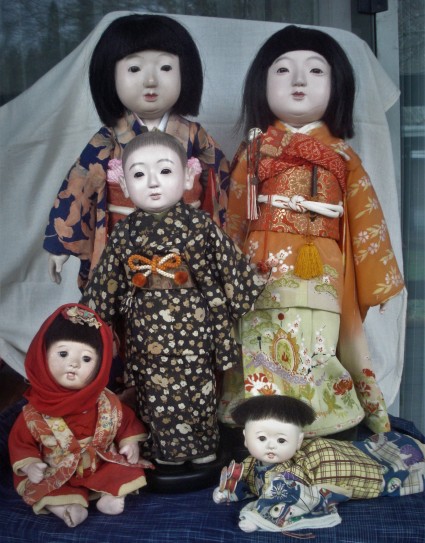 My newest girl is also Showa era from the 1920’s or 30’s. She may be considered a “better” ningyo because of the quality of her kimono and facial detailing, and because her nails have indented detailing. She is 19″ tall.

These are gofun dollhouse size play dolls that come in a little basket with a lid. The okasan and otosan are 4″ tall. Author’s collection

The Japanese dolls or ningyo that I have shown you here are the ones that have touched my life the most, while I lived in Japan and afterward. There are many more types of ningyo, and ningyo feature prominently in many aspects of Japanese life, not just for children. I have shared my story with Japanese dolls here, yet I have not told you much about the history or characteristics of the dolls. Perhaps that will be another story . . .

Kita, Terry. The Sun Shines For Us All: The Friendship Dolls From Japan. Valparaiso, IN: Valparaiso University, 2015. 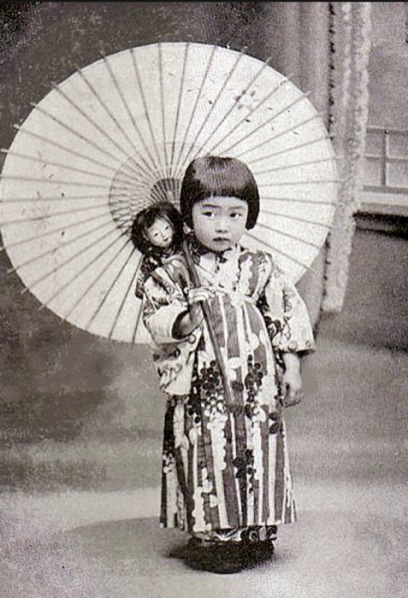 Japanese girl in kimono with kappa hairstyle and ichimatsu ningyo on her back, 1920

2 thoughts on “Beyond Oceans and Decades: In Search of Ningyo”